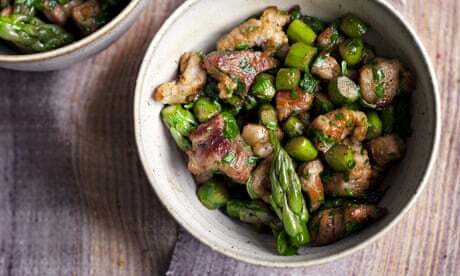 The British asparagus that arrived in March felt like a Christmas card that comes too early. I let it’s, in a whole lot the same way I placed premature greetings again in their envelopes. Yet there has been still the sit back of early spring once I bought the primary bunch some weeks later and roasted the thick spears, tossing them with an intense dressing crafted from quick, fat jalapeño chilies, ground cumin, and lime. The notes of smoke and spice worked exceedingly well with the juicy stems and their crisply roasted recommendations.

A week later, I picked up a more fragile bunch with finer stems and gave them a correctly delicate remedy, providing them with a cream fabricated from smoked salmon and the kind of sweet, mustardy seasonings we usually reserve for gravadlax. Both worked, however, in particular approaches. There is a temptation to consider asparagus because the cotton-wool youngster of the vegetable patch, however, responds just as nicely to a slightly stricter remedy. Those silky butter-kissed sauces are all best.

I experience a well-executed hollandaise as a whole lot as absolutely everyone. Still, vibrant flavors of ginger, chili, and mustard make asparagus smile, too (use them in a dressing with olive oil), particularly while married to orange, lemon, or lime. Such recipes elevate the spearspears’its instead of sending them to sleep under a consolation blanket of butter and egg. There is a dish I like to bring out in spring; a moderate-mannered sauté of early lamb and young shallots with asparagus pointers and an aniseed-flavored herb, including tarragon or, if you can discover it, chervil. It would help if you had a tender to reduce meat from the leg or fillet because cooking is enormously short. Not the most inexpensive of dinners, but it feels, simply as any asparagus supper appears to, like a proper party of the new season and all that is yet to return.

My father ate meals saved for livestock so I can teach